Political battles are being waged throughout our country. Who will be the party nominees? Who will be the next president? There are many issues deeply dividing our country that are concerning to all. Christians wonder which candidate they should support. God doesn’t tell us. 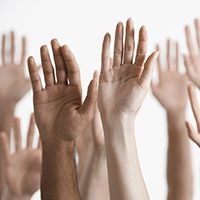 As Christians, we are citizens of two kingdoms: thekingdom of the left (this world—in whichever city or country we live) and the kingdom of the right (the Christian Church). It’s difficult to balance those two kingdoms in our lives since they often intersect and occasionally collide in opposition. What are we to do in a rage-filled political battle like the one currently being waged in the United States?

When it comes to politics, one concern of Christians should be to conduct ourselves in a manner that does not bring shame upon Christ and His Church. It is our thankful response to God to obey all of His commandments, to love our enemies, and to let our conduct be worthy of the gospel of Christ (Philippians 1:27). With those things in mind, we can enter into discussions respecting the views of others even when we strongly disagree with them.

As Christians, we cannot expect everyone to believe as we do. Our views on everything in life should be informed by our faith and seen through eyes focused on the cross. A different political view does not mean someone is not a Christian. They may have a very strong faith and yet support a candidate with some views inconsistent with Christianity for a wide variety of reasons. God does not require a political candidate to be a Christian.

As a citizen of the United States, you have the privilege of speaking your mind about political issues and candidates. As a Christian, be careful of the manner in which you speak your mind. As in all things, we must be patient with others and try to understand their views. When it comes to issues that contradict God’s teachings, we must stand firm in the truth of God’s Word above all else.

As a Christian, you are a citizen of two kingdoms. But only one of those kingdoms is eternal. Jesus has earned your citizenship in His kingdom by His perfect life and innocent death. And we live our lives in love and thanks for His mercy.

Which candidate should you support? You must decide according to your conscience. But note what God does say about political leaders: It is better to trust in the Lord than to put confidence in princes (Psalm 118:9).

For more information on the government’s God-given duties as well as your responsibilities toward the government, read the passages under “Civil Government” in the Table of Duties in Luther’s Small Catechism. (This article provided by Rev. Paul Fries)